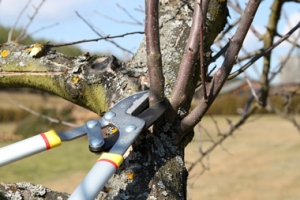 When should I prune fruit trees?

Fruit trees such as apple trees, plum trees, pear trees and cherry trees should be pruned from mid-winter to just before bud break or before leaves appear. This is called dormant pruning. In BC's lower mainland climate this is generally from late February - early April.

What can I do to keep my trees healthy?

How often should my fruit tress be pruned?

Dormant pruning is done once a year in mid to late winter. In general, most trees should be pruned yearly to keep water shoots at bay.

Is it ok to buy fruit trees from big box stores?

We typically don't recommend buying fruit trees from any big box stores because they often ship their trees from Oregon or California and often have poor vigour and hidden health problems. For the best quality trees contact a local nursery or have us hand pick them for you.

My plum tree has black chunks throughout the crown. Is it diseased?

Your tree most likely has a fungal disease called Black Knot, plums are often hit the hardest. The best recourse here is to prune out all visible infected areas when the tree is dormant. Clean tools between pruning with bleach to prevent further spread.

How much does it cost to have my fruit trees pruned and serviced?

Contact us today to set up a time for a free estimate!

Specialized Tree Care is a member of the International Society of Arboriculture and is accredited by the Better Business Bureau with an A+ rating.